With around 32% of tea production today, Kagoshima is, after Shizuoka (39%), the second largest Japanese tea producer. It is interesting to note that Kagoshima on the other hand represents 20% of the cultivated area and Shizuoka 40%, that is to say that Kagoshima produces more per area (this is mainly due to the number of harvests carried out, less on average in Shizuoka and cultivation and harvesting methods). Kagoshima has not ceased to nibble ground on Shizuoka for many years. In reality, it has not been that long since Kagoshima became such a large tea producing region and many Japanese are still not aware of Kagoshima as a place of tea. For a long time confined to an image of low-end tea, Kagoshima has grown and developed over the past 40 years by managing to achieve significant quality with mass production. The main production center is Minami-Kyûshû (Chiran and Ei) but tea is produced there throughout the prefecture, on the two peninsulas of Satsuma and Ôsumi, in the north at Kirishima, but also on the small islands of Tanegashima and Yakushima. 99.7% is grown on flat land.

They are essentially shaded fukamushi sencha with a rather strong roasting in general. Kagoshima does not highlight an old “tradition” or style, but produces tea according to market demand. So very greenish fukamushi teas with a lot of umami (shaded then), exploiting cultivars going in this tendency: Yutaka-midori, Asatsuyu, Saemidori, etc. Also, the other key to success lies precisely in these early cultivars, taking advantage of its southern geographic location, allowing Kagoshima teas to arrive first on the market during shincha, when the teas could be sold the most expensive on the market.

If there is clearly a great success in maintaining an overall quality with a mass production, the other side of the coin is an undeniable lack of personality and variety which can quickly annoy the hard-core lover of Japanese tea. Unfortunately, for the moment I hardly see any strong movement towards diversification and distancing from the tendency of “umami only” teas, opaque green brew and sweet roasting. This is understandable of course because this is what is popular and easy to sell, this trend is clear in Japan but also abroad (even on Thés du Japon I can see it). This directly influences the production style, but also the recent development of cultivars.

It is in light of this situation that it seems to me that Asanoka is a very valuable cultivar. It is a cultivar made in Kagoshima since it was developed at the Makurazaki research center from the cross between Yabukita and a variety from China, Cp # 1. Registered in 1996, it is recent.

The fragrance of this variety is unique, exotic and floral, sweet, evoking mango and ripped grape. This characteristic is very clear with the dry leaves, often much more than in the infusion, which is sometimes confusing.

This is confirmed with the Asanoka sencha that I present today. It comes from Iriki, an area further north, more confidential, than the giants Minami-Kyûshû or Makurazaki. It is also a close to standard steaming, or in any case a sencha preserving slightly broken leaves. It was shaded for seven days. 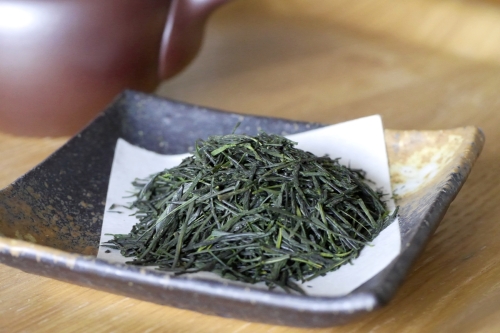 Rather than the mango scent, I would notes of very ripe or even slightly fermented grapes are stronger in the brew.

It is good to infuse a little warm because Asanoka is also a cultivar with lots of umami. 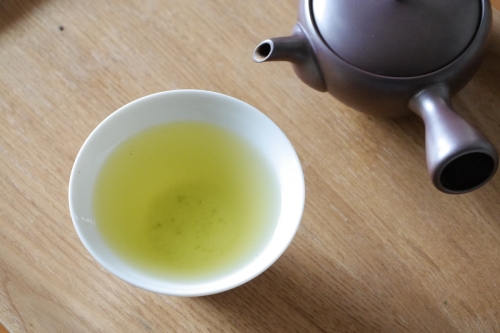 There indeed, on the nose, the infusion is not as aromatic as the dry leaves, yet these quite particular exotic and fruity aromas are very present, but not as strong as on the palate.

There is no astringency, and the umami is present, but without emphasis.

The whole is aromatic, with an atmosphere, a very specific personality, but on the other hand not particularly complex nor powerful. The after-taste is moderate.

The following infusions confirm this aromatic tendency for a relatively light and velvety brew. No astringency. 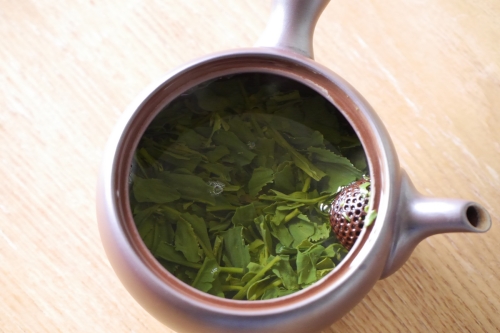 Asanoka is a cultivar that stands out clearly among all that can be found in Kagoshima, completely different from Yutaka-midori, Saemidori and other Asatsuyu. Uncommon it is not very rare either, and deserves a little more attention, and a little more upscale production.

I am very happy to be able to present with this Iriki sencha a face different from Kagoshima tea.

To finish with Kagoshima, there are other points that could be highlighted, in particular the vitality that there has been at the research center in the development of black tea cultivars. Indeed, when Japan still encouraged (until the end of the 1960s) the production of black tea for export, Kagoshima was a place of choice because of its warmer climate. This also explains the large presence at the Makurazaki research center of Indian and Chinese varieties.

We could also talk about the UFO which is the Sunrouge cultivar, but I hope to be able to come back to this later.