After two beautiful gyokuro from Uji-Shirakawa, I will stay in this production area with three matcha, all made from tencha produced by the same producer, Tsuji Kiyoharu.

In fact, traditionally, Shirakawa, in Uji, is foremost a production area renown for ​​gyokuro. His image is not at all associated with tencha (tencha is the raw material to be ground into matcha), and Tsuji-san’s family was gyokuro grower. But by taste, passion, Mr. Tsuji choose to shift to tencha production, completely abandoning the gyokuro, and with great success since today he enjoys wide recognition, having obtained several times the price of the minister of agriculture to national contest.

I take this series of articles about gyokuro and matcha, to correct an error that I saw on several website, and perhaps many vendors overseas continue to made this mistake. No, matcha is not powdered gyokuro. Matcha is obtained by powdering the so-called ”tencha”. Certainly tencha and gyokuro (the true ones) are grown uncut and shaded under arbors. But the shading of tencha is longer (25 days on average against 20 for gyokuro), picking is done in a slightly different way, and especially, drying is completely different, the tencha isn’t rolled. 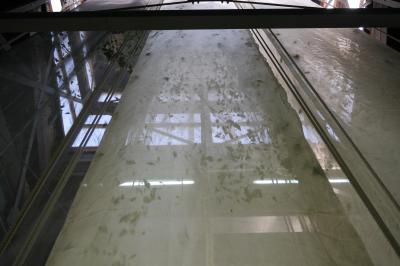 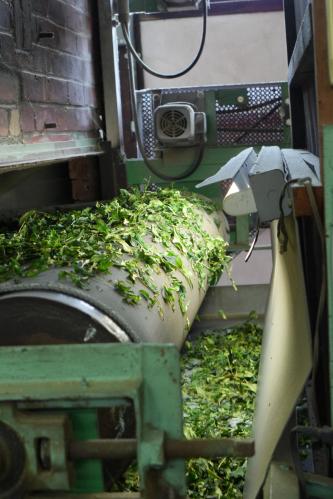 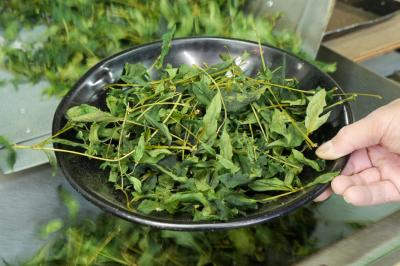 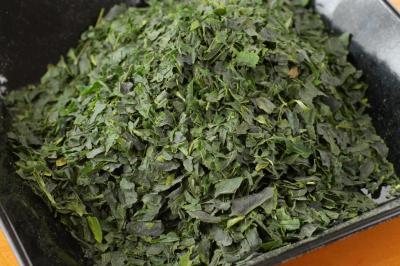 So I present this year three matcha by Mr. Tsuji, three different cultivars. Three different ranges too, although all three are high-end.

First, a matcha made from Asahi cultivar coming from the higher end of Mr. Tsuji’s tencha, which he presented to the national competition this year, arriving in the lead.

This Asahi is cultivated with traditional shading called ‘honzu’, ie first covered with a kind of straw blinds, then with straw placed on over it. This traditional method is now quite rare for matcha and even more for gyokuro, labor and cost required is very important. (Shading of “traditional Yame gyokuro” in Fukuoka is actually a simplier technique that uses only straw blinds, so much easier to implement). Only plantations for the highest quality tencha (contests, etc.) are still covered this way. Nevertheless, it is a traditional Japanese technique that tends to disappear and which is very important to be protected.

This matcha ha a very powerful perfume, fresh, reminding pastry, stimulating.
Pouring hot water, there is an amazing custard cream scent. There is also something woody in the background.

The tea is strong but very sweet, a sweetness that is really closer than just mellow umami. This is not just an impression in the after taste, but something that we really feel in the mouth, on the tongue, cheeks. The creamy smoothness of this matcha is great. It is only tea and water, yet it is a real dessert, and at that level the very it is so better than hype “matcha latte” made with fake/cheap matcha, full of milk and sugar. 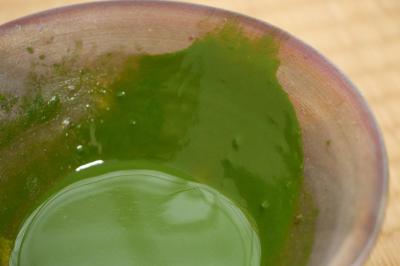 With such a tea, for enthusiasts amateur, a koicha is to be tried. For me, the koicha will not become my daily, but occasionally, and then there is better to run with friends …

Although very upscale, very suitable for the koicha, Samidori cultivar matcha were shaded under usual synthetic fibers (no misunderstanding, this method remains a lot of work to implement, requiring more effort than the direct shading of kabuse-cha and some sencha). 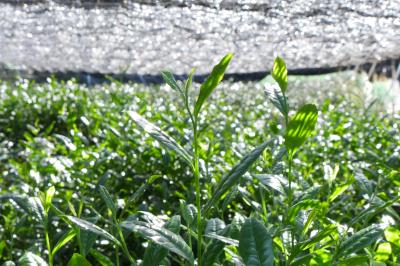 Samidori offers a sweet and tangy flavor, almost lemony, but also the hot cocoa flavors characteristics in good matcha. In the mouth, it was first a greeny, a little incisive, first attack, especially when matcha is still very hot, from which emerge naturally a very soft and mellow after. When warming down, this tea gives a lot of creamy and velvety flavors, but also sweet aromas of confectionery with light reminiscent of red fruit. These are flavors that lasting up in the mouth in length. No astringency or bitterness of course.

I have saved for last the less expensive of the three, which is made from 90% of Yabukita and 10% of Samidori (more for color than for taste). Yabukita is the most widespread Japanese cultivars, rather it is a cultivar for little or no shaded teas, but also more generally a cultivar of great quality. However, for high-end matcha teas are preferred cultivars of shaded growing. Frankly, I had some doubts when Tsuji-san gave me this summer a box of that Yabukita matcha sample (the original project focused on the very high-end only, so Samidori and competition level Asahi), it seemed to me expensive for matcha made with Yabukita. Yet I was mistaken, I was very good.

Rich and sweet fragrance typical of shaded green tea. We are not at the same divine level of the other two, but it is also a frank perfume, familiar, almost comforting.

In the mouth it is nevertheless already sufficiently velvety, with a good attack, powerful but not aggressive, a very pleasant softness highlighted by a touch of mild astringency. The after-taste is strong with typical green and mellow shaded grown teas umami. It lasts very long in the mouth, may be due to a small tannic touch, thanks also can be to the overall quality of Yabukita. Indeed, this may be what surprises most with this matcha : getting such a quality for a matcha made from Yabukita !

I made the first batch of these three tencha ground end of August, so that their maturation, Asahi and especially Samidori was still little advanced, giving matcha still relatively light, and each batch later, with more maturation, will give a stronger matcha, with more pronounced umami, and less greenish taste. As the comparison between the different cultivars from a same terroir and grower is very interesting, to see the evolution of the “same” matcha according to the maturation of tencha is exciting.

Finally I would like to (re)say that matcha is probably one of the easiest to prepare teas, and it is very unfortunate that his image is so associated with that of the very rigid tea ceremony. A good matcha at home ”on the go”, simply just to enjoy these very rich flavors, it’s just great!
Matcha is this, and not all products, flavored drinks or pastries with so-called ”matcha” which is in fact made from shaded teas powder mechanically harvested from the 2nd or 3rd harvests. Let’s enjoy real matcha ! A bowl, a wisk, water. That’s all you need.