As with wine there are different varieties of vines (grape varieties), the Pinot Noir, Cabernet Sauvignon, Chardonnay, Merlot, and so on, for the Japanese tea as there are also many varieties (or cultivars ) of tea bushes.

Today, three-quarters of the tea plants cultivated area in Japan are dominated by the cultivar called Yabukita. However, there are a hundred of cultivars, some that offer particularly important flavor variations. This makes it an exciting and crucial point for understanding the tea, as well as the grape varieties of wine, which adds an extra dimension to the types of tea, producers and terroirs.

The development of tea cultivars is made by selection and crossing, and reproduction by cuttings. Tea plants of the same cultivar therefore have the same genetic heritage, which contrasts with the variety called ‘botanical’ obtained from seeds (“zairai-shu”), thereby, each shrubs is necessarily different.

The issues and interests of cultivars are numerous:
– First of all, from the point of view of the consumer, it is of course the variety of flavors and fragrances they present.
– Also, for the producer, have plants more resistant to a particular disease, a particular insect or better adapt to a particular type of climate.
Also, the use of several different varieties would spread the crop over a longer period, taking benefit of the fact that there are early and late varieties and thus avoid the saturation in tea factories overloaded during the harvest time (freshly picked leaves to be processed as quickly as possible).
Finally, these cultivars (hinshu 品種), unlike botanical varieties of tea (zairai-shu 在 来 種), are showing greater stability in terms of quality and a much greater productivity.

In the current department of Shizuoka, at the end of the Meiji era, Sugiyama Hikosaburo 杉山 彦 三郎 (1857-1941), understood the existence of early, intermediate and late tea shrubs, and studied cuttings techniques in order to develop a stable variety of tea plant, which does not lose its characteristics like the “botanical” varieties reproduced using seeds. 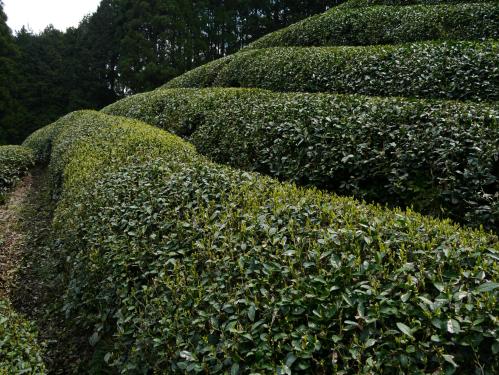 A zairai-shu plantation in Kumamoto few weeks before harvest. We can observe the growing level difference of the young bud, between each tea plant.

He used many trees of high quality in the region, and created some tea cultivars, including the one he named Yabukita because this tree was grown on the north (kita) of a bamboo grove (yabu).
However, it was after the 2nd World War that this variety began to attract attention, and then spread throughout the country, with its excellent quality. Switching to cultivar plantations really start in the 60 and, by 1975, Yabukita that gets all the favors because there existed no other varieties that can stand comparison in terms of quality and productivity.
Today it dominates 76% of the cultivated area! This is a big obstacle to diversification, yet it must be remembered that even today Yabukita remains hard to match in terms of quality.

Yet there are now hundreds of these varieties.
The dissemination of more diversity of cultivars has become a major issue, not only to spread the harvest periods (a variety whose collection is earlier than the Yabukita is considered hasty, and, the opposite case, late), but also, in my opinion, in a marketing point of view, it is very interesting to play this diversity of taste and flavor, additional element that gives the Japanese tea all its depth, which makes it a gourmet product similar to the wine. This aspect is unfortunately completely ignored by the average consumer.

It should be added that for a tea producer, to start growing a new cultivar is a difficult and expensive thing. It is necessary to obtain enough cuttings, and then it usually 5 years before you can get a harvest. Also, each cultivar will be grown and processed differently to make good tea.

Although each cultivar can be used for any type of tea, rather they are originally intended for a particular genre. Thus, most are naturally designed to sencha (this is the most prominent Japanese green tea type), but there are cultivars for shaded growing (gyokuro, matcha, kabuse-cha) as Goko, Asahi, Samidori, Komakage, etc., to kama-iri cha (Takachiho, Yamanami, etc) and even for black tea, as Benifuki, Benihikari, etc.

Sometimes a cultivar name can give an indication of a characteristic. A name that includes ” beni ” (紅) appoint a black tea cultivar. ‘Wase’ (eg Kondô-wase) indicate that the variety is early, and conversely, ‘oku’ that the cultivar is late.

In the same place than above, Kondô-wase cultivar leaf, bigger. This hasty cultivar is a crossbreed which contain heritage of Assam variety.

Some cultivars are also noted for their molecular property. In exmeple, Benifuki, processed as a green tea, contains a very large amount of methyl catechin (absent cultivars of numbers) which would have properties to relieve hay fever (processed as a black tea, the catechin get oxide).
Sang-rouge contains many anthocyanin, a molecule that pigmented red or purple many plants, and could serve as food coloring.

Sae-akari is a new cultivar of which much is expected, could be a candidate as a substitute for Yabukita in the futur ! 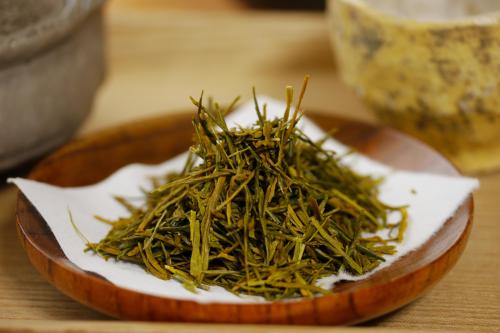 On the scale of all Japan, the most common variety of tea (% is cultivated area share):
– Yabukita 76%
– Yutaka Midori, about 5% (early), mainly in Kagoshima
– Oku-midori, about 2% (late, generally gives a quality tea. Widespread in all producing regions)
– Sae-midori, about 2% (early, high quality, especially in Kyushu)
– Sayama-kaori, about 1%
– Kanaya-midori, about 1% (a little late)
– Asatsuyu, 1% (early, very characteristic taste of bean, very green.)
– Botanical varieties “zairai” represent only 3%

Actually there is a great diversity of cultivar but it remains indeed to passionate small producers, whose small quantities produced little influences the statistics.
Cultivars with unique flavors like Sôfû or Kôshun develop there for the delight of enthusiastic amateurs. Such cultivars also attract attention for their potential for the production of semi-fermented teas.
It is interesting to see that with 2% of the cultivated area, Sayama-kaori (originally from Saitama) holds the second position. Its powerful fragrance and its resistance to cold were a reaon to this relative development, but today this cultivar is in sharp decline, obsolete because of its poor color and its tendency to astringency.
Finally, note the rare Yaeho Sugiyama (developed by Sugiyama Hikosaburô) is the most early cultivars grown in Shizuoka.

However, Kagoshima (2nd producing region) acts champion with only 37% of Yabukita. Southern department of Japan, Kagoshima take benefit of the warm climate for growing many early varieties, mainly Yutaka-midori (a cultivar which quality is not good actually), which represents 28% or Sae-midori (variety that attracts today particular attention, high quality) with 9%, or Asatsuyu 5%. It may be noted on the islands of Tanegashima and Yakushima off Kagoshima, the presence of super early cultivars like Shoju 松寿 or Shuntaro whose harvest are late March!

Kyoto also stands relatively high on 69% of Yabukita, followed by Okumidori (12%). This department, a major producer of gyokuro and tencha (matcha), should be distinguished by the extensive use of variety designed for shade growing such as Asahi, Gokô or Samidori.

In short, the cultivar is a critical input for Japanese tea, exciting for the consumer, and a key to the future of the Japanese tea production.
Nevertheless, it appears that even today cultivars other than Yabukita are very difficult to sell in the market places, where the majority of large wholesalers and retailers continue to prefer Yabukita. This is of course a very negative point for producers which doesn’t encourage them to renew their plantations. Only early varieties (especially in Kagoshima – Yutaka Midori and Saemidori) sell well for good price, simply because when they arrive, Yabukita isn’t available yet, and that in the race to shincha (new tea) products arriving first sell best …… but yes, ironically, it is rather late varieties that often give amazing green teas.