As usual, October is the month of the release of the matcha of the year. As usual, I still propose non-blended matchas made from the tencha (unmilled raw material) by Mr. Tsuji Kiyoharu from Shirakawa area in Uji. This allows me to propose matcha by cultivars, each with their own characteristics, at the risk of losing some depth in comparison to the usual matcha blends. You will find the divine Asahi, Samidori, Uji-hikari and Yabukita (90% Yabu, 10% Samidori). On the other hand, I do not propose the Saemidori, because beside Yabukita (for an entry level) I prefer to stay on the Uji native cultivars. Also, the novelty this year is a Gokô !!

Before presenting this Gokô matcha, I would like to come back a little, again, on what matcha is. Unfortunately, especially in the West, we found everything sold under the name of “matcha”. A lot of delirium about “tradition”, “ceremonies”, spirituality, etc. This hides above all a lack of knowledge of what is matcha, methods of cultivation and production. There is a tendency to see no more than a shaded and powdered tea on stone wheels. Even this last point is fishy because many teas sold as matcha are ground in ceramic ball mills. Also, one finds  “culinary grade” and “ceremonial grade”, without any exact criteria coming from one or the other. However, we know how much mediocre matcha could sometimes be used in the tea ceremony, as many teachers often have no interest or knowledge for the tea itself.

A number of criteria are taken into account in the manufacture of these powdered teas:

– Shading time: more than three weeks … yet we find “aki-ten”, unshaded autumn crops serving as a base for super low-end matcha

– Shading method: crucial point, in principle the tencha is shaded under arbor, not by direct shadind directly covering the shrubs. However, most of the tencha produced is in direct shading!

– Type of plantation: another crucial point, in principle tencha is produced with “shizen-shitate” planting, ie with uncut trees, which are cut at 30 cm high after the spring harvests to grown back until the following spring. This only allows one hand harvest, and of course only one harvest per year. Direct shading is of course impossible. Is it necessary to specify that this type of plantation is a minority?

– Season: we understand that except rare shizen-shitate, 2nd harvests are also to make “matcha”. (and fall harvest for aki-ten as above)

– Manufacturing: matcha is produced from tencha, which is steamed and dried without rolling. However, there are low end “matcha” made from a partially rolled material called “moga” (these should also be called to disappear). 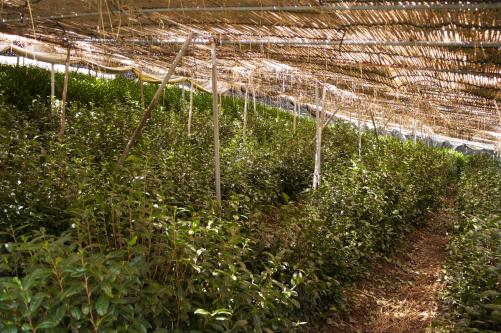 In short, if we want to talk about “tradition” (very ugly word rather meaningless) or authenticity for matcha, we should mention products from shizen-shitate plantations. However, this represents little more than 3% of what is made in Japan and sold as matcha in the world.

This is the type of matcha that I propose. Also, I am interested in matcha as a tea for these taste qualities as such, and I would like to offer, for serious tea lovers, a “gourmet grade”. No fashions and trends, no occultism, concrete and techniques, authentic shizen-shitate matcha. 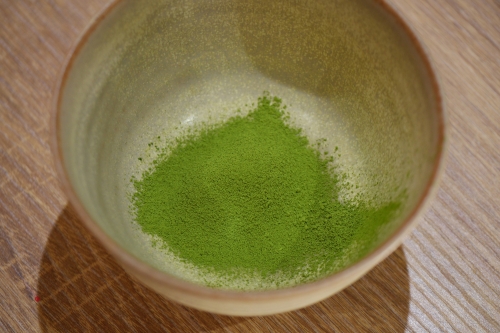 Well, let’s now mention this Gokô. This cultivar is very familiar with fans of Uji’s gyokuro, it can even be said that it is quite representative of this type of tea in this region. In contrast, this shaded tea cultivar is much less common for tencha, especially so I will now call the gourmet grades. It will be found a little more on tencha from mechanical harvests.  The particular flavor of this cultivar makes it less appreciated than others. However, from my point of view, this perfume, exploited without blending, is precisely a very positive point as we must try to promote matcha for its flavors as a gourmet drink, and not as an ingredient for pastries or an accessory in a ceremony. 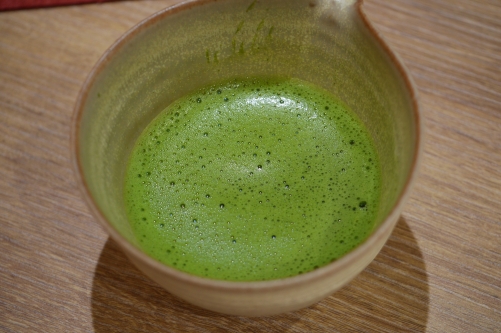 It is of course very mellow, rich in umami and without astringency, but there is less velvety and creamy than in a Samidori or Asahi. On the other hand, we find something fruitier instead, sometimes evoking the fig sometimes raspberry, a touch of coconut too. It seems to me to have something a little peppery nose too. The umami itself is rich but fine, not overwhelming or sickening.

So I’m not disappointed and very happy to have asked the producer to make me a high-end matcha with this Gokô.
It also confirms my admiration for this cultivar. Too much confined to the gyokuro and the kabuse-cha, we see that it is on the one hand here excellent for matcha, and on the other hand in unshaded sencha, like my tea of Wazuka, which was one of the biggest Japanese teas success this year.