This is the second tea in my series of traditional regional bancha. After the goishi-cha, tea fermented twice, with a very particular sour flavor, I present the batabata-cha, another fermented tea (dark tea), from Toyama. It is only a single fermentation, aerobic only (ie in contact with the air, unlike the anaerobic fermentation without oxygen of goishi-cha).

In fact, to be more exact, “batabata-cha” is not the name of the tea itself, but the name of a practice in this geographical area of ​​the village of Birudan (Asahi town). It is therefore a dark tea (post-fermented tea called simply kurocha 黒茶 in this area) prepared boiled and then beaten in a bowl with a whisk called “meoto-chasen” (夫婦茶 筅) with the addition of a pinch of salt. It is therefore a tea belonging to the category of “furicha” (振り茶, see this article). It is customary to offer the first bowl on the Buddhist altar, and in this region, batabata-cha is originally part of religious rites. Birth, marriage, etc., are an opportunity for the people of the region to gather around this particular tea. It is then eaten with vegetables, beans and mountain plants pickled (tsukemono) or stewed (nimono).

It was originally simply called “ocha” by the people of the region, then it would have started to name it “batabata-cha” after another beaten tea  from Niigata that the poet and critic Aima Gyofû from Itogawa (Niigata pref.) called “batabata-cha” in his writings. “Batabata” refers to beating tea with haste.
A bowl called gorohachi-chawan (Sasagawa-yaki, Akagawa-yaki) is usually used.
One say this dark tea would be consumed since the Heian era. Nevertheless, the first historical element that could refer to it dates from 1472, the monk Rennyô would have used this dark tea during a Buddhist ceremony.

Here again understands that this is originally a tea not drunk for itself, but linked not only to local life, but also a part of a special meal.
Also, until the 70’s, the dark tea itself was not made locally but in the Fukui prefecture. As production stopped, fermented tea began to be produced in Asahi town (I recall that it is a question of fermentation, under the action of microorganisms, and not of oxidation as it does in fact for black tea and wulong) necessary for the survival of a local custom.
Leaves picked in summer are cut and then steamed. They are then coarsely kneaded by hand, then stored in a room where they will ferment for several days. Temperature control is important. As the fermentation progresses, the temperature increases. We set up separations, we mix up, press the leaves, etc., to control the temperature which should not rise above 60 ° C. Finally they are dried first indoors and then outside under the sun. 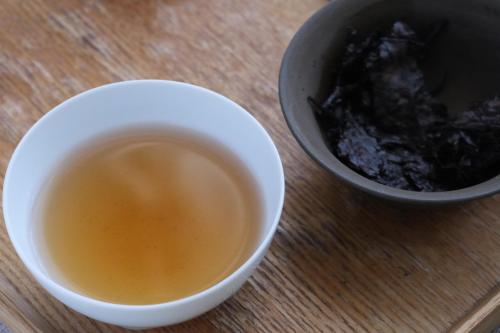 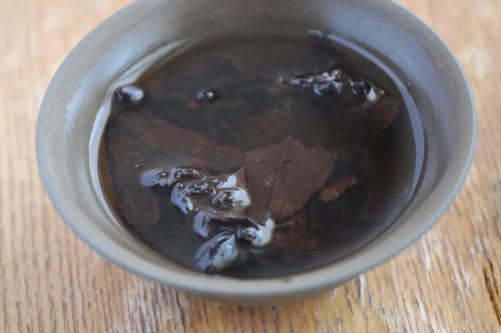 This tea is normally drunk boiled in a kettle, even if it is not beaten (it is called then sancha 散茶). We can then obtain a very rich and perfumed tea, in large quantity allowing to drink it with many people (on important occasions) or simply all the day. However, be careful with the dosage and duration of broth as it can become a bit bitter.
The other, less orthodox method would be to simply use a small teapot or a gaiwan, with a good dose of leaves and make multiple infusions with boiling water. Initially, one minute, then we can increase the duration afterwards. In this case the tea will never become too strong, but never very strong either, but after all it is a bancha, to consume in large quantities. Cold, it is also very refreshing.

Without anaerobic fermentation such as Shikoku’s dark teas, we do not obtain a significant development of lactic acid bacteria, so we do not find here the strong sour flavors of goishi-cha.
We find aromas that could possibly be placed in a field close to some fermented puerh (shu), or Chinese dark teas like fu cha; Of course, to keep in mind that this batabata-cha is a bancha, not a super high grade tasting tea.
The aromas evoke first of all the wood wax. Pleasant notes of mold and earth, but also rounder flavors of cooked rice, as well as a slight touch of mint.

After the very destabilizing goishi-cha, I must say that this post-fermented Japanese tea is very nice and easy to access. I am not very sure, however, that the method of fermentation is particularly controlled, having had the opportunity to drink one dating from two or three years, whose fermentation was clearly insufficient, then giving a tea a too light. This one of this year is very nice in any case.