I think there is no longer any need to introduce Hiruma Yoshiaki, Saitama Prefecture tea producer. For those who do not yet know him, there is an interview of him on this blog.

This year, in addition to two kama-iri chas, one of which will be described later, I selected two of his flagship products: “bihakkô-chas” (微醗酵茶), which I translate as “micro-fermented” (in other words, micro-oxidized) teas. These are very special senchas since before they are steamed, they are strongly wilted in a unique machine known as the UVT Hiruma, invented by the producer himself. Next, they are steamed normally (i.e., futsumushi or asamushi).
A quick note that is a little off-topic: even though he does not call them “bihakkô,” his fukamushi senchas also go through the wilting machine, but for less time. For bihakkôs, he takes this process to the maximum. 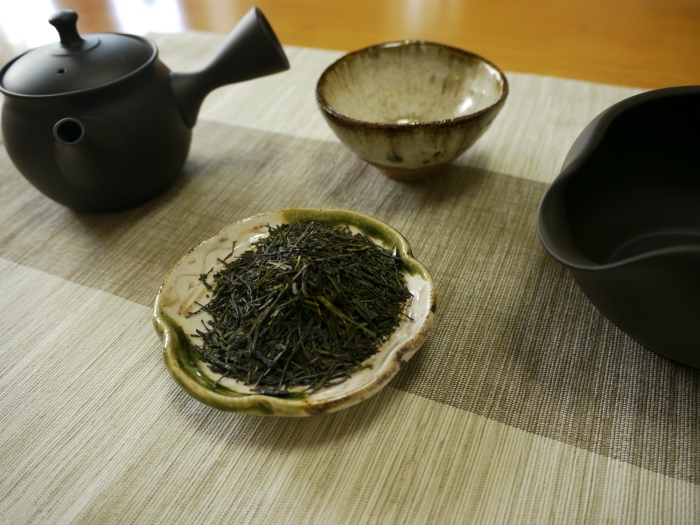 Sayama Kaori is a cultivar that originated in Saitama and is relatively widespread. It had great success in the past, even in Shizuoka, despite a drop in popularity today. It is also the first cultivar that Hiruma-san experimented on using his UV machine, and we can say that it is also with this cultivar that his skill and knowledge are the most advanced. 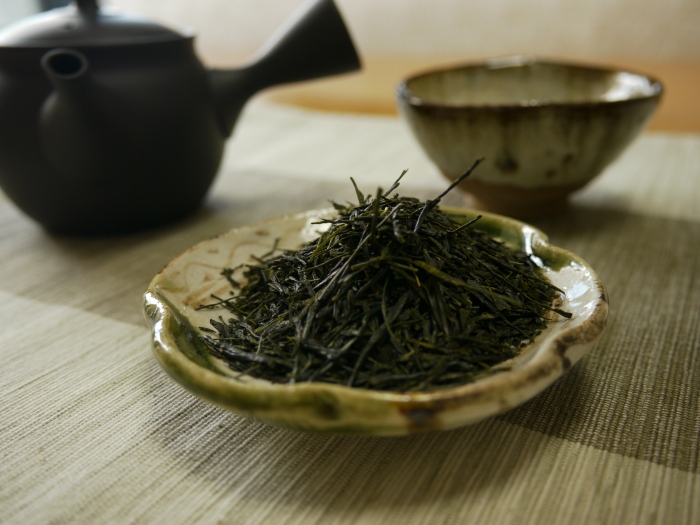 The fragrance that comes from the leaves makes it immediately obvious what are the advantages to the wilting process: there is a delicious floral perfume with a creamy texture in the special case of this Sayama-kaori. It is closer to Oolong than to usual sencha scents.
However, wilting has some disadvantages too, so be careful how you prepare this tea. Don’t say to yourself, “Oh, a futsumushi: I’ll let it steep for a minute and a half!” No, no, no.
4 scant grams of tea (1.2 tsp) for 70 ml (1/4 cup) of water, 70°C (158°F), 40 seconds, no more. (Though of course it is up to you.) 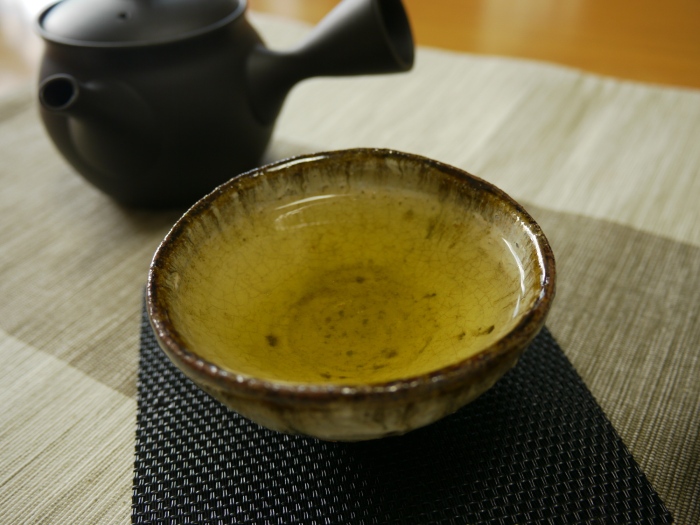 The liquor is a thick yellow, perfectly clear, yet different from the yellow of classical senchas. But what fragrances! The dry leaves were not misleading: sweetness, floral notes, creaminess. Happily all of this is also found in the mouth, and for a long time! There is also a velvety background of spicy, green flavours.
Completely unusual. It is exquisite. 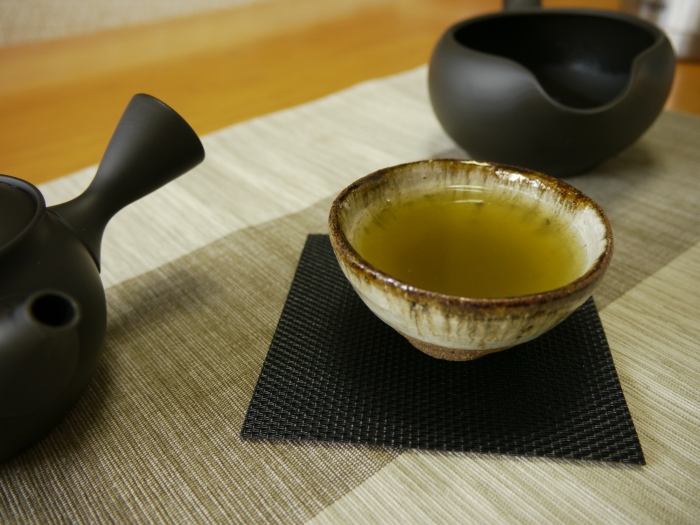 For the second infusion, a few seconds with water that is barely hotter. While the fragrance is still utterly sublime, the liquor is much less beautiful to look at. We could interpret this phenomenon as a little disagreement between the wilting and green tea steaming processes.
A little astringency comes out, but the overall result is excellent, with a very fine, very deep aftertaste. It is really much better than might be suspected, given the liquor. 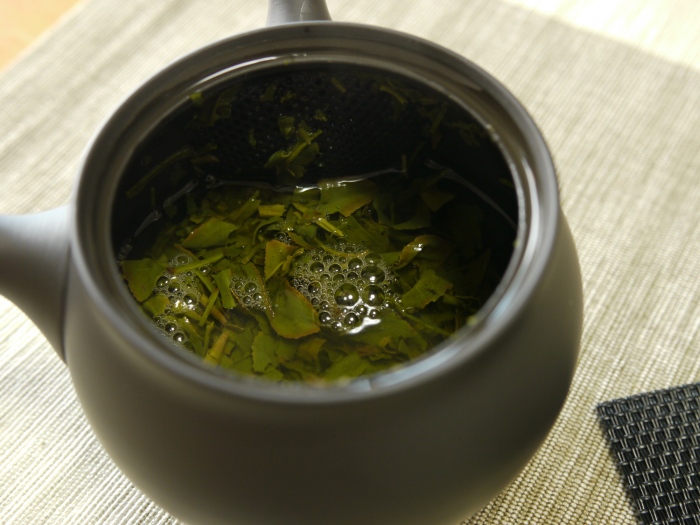 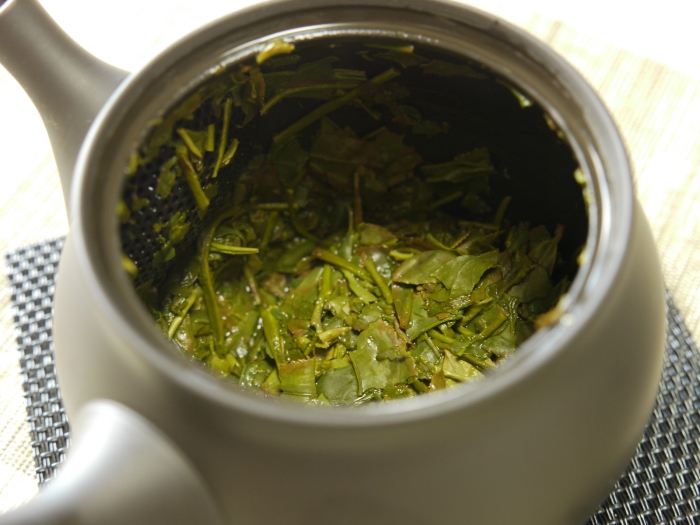 The leaves have brown edges, the beginnings of oxydation. 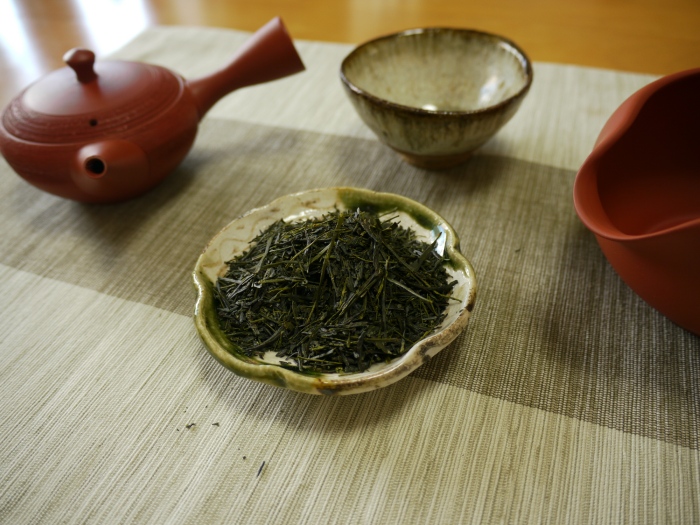 Although I did not know it, this cultivar was my first encounter with Mr. Hiruma’s teas. What a surprise the fragrance was, but also what astonishment at the sight of the liquor, which becomes brown with the second infusion (and even with the first, if it is not well prepared). Indeed, it seems to me that while Hokumei provides a particularly dense floral scent, the defective colour of the liquor is a major drawback. I have the impression that this problem has been reduced slightly this year. 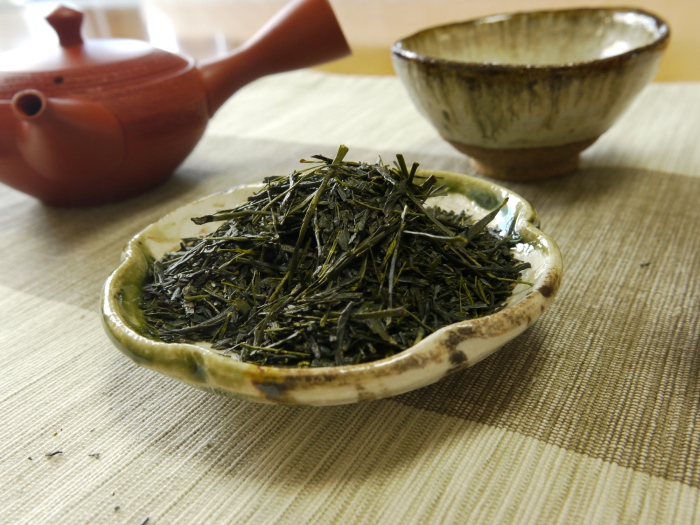 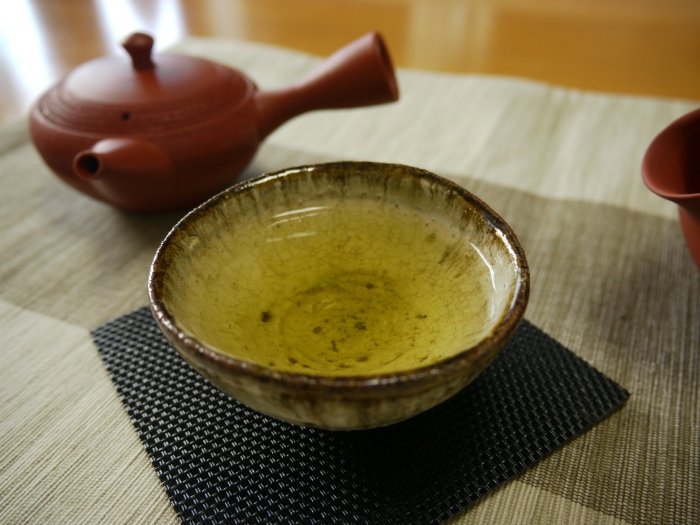 At first we obtain a truly pretty liquor, but above all, as the dry leaves foretold, we have another sublime fragrance, yet more floral, sweet, even fruity. In the mouth we have the impression of drinking a concentrate of subtle fragrances that leave a strong impression on the taste buds. It is also keener. 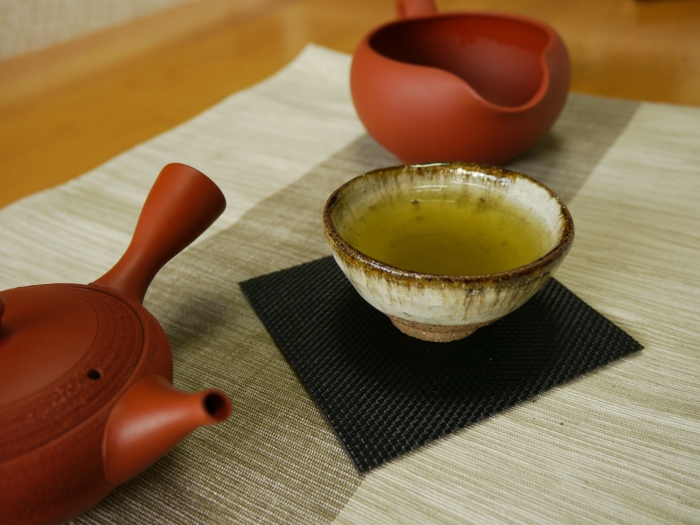 Of course the liquor is not as beautiful in the following infusions, but the problem is only visual because the flavours, their wealth, their strength, are fully present. 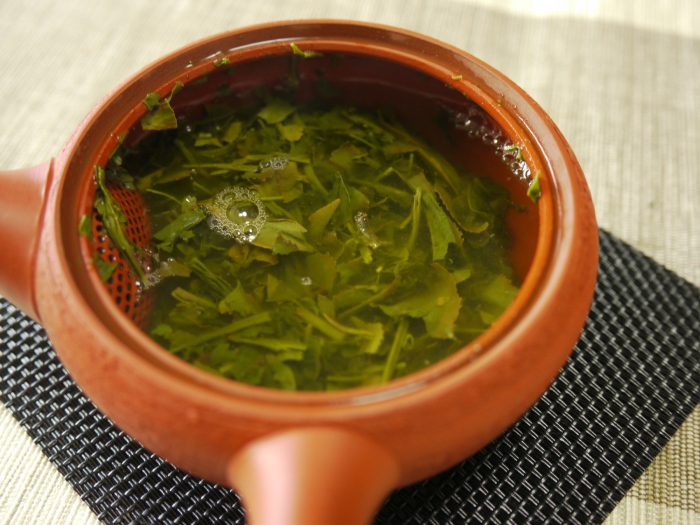 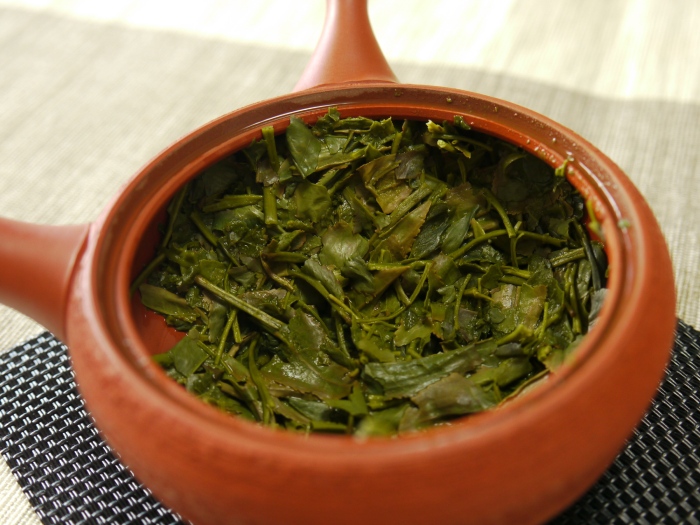 The leaves look a little less oxydized than those of Sayama-kaori, which may be the explanation for the slightly “prettier” liquor.

Two very special senchas, unique in their own ways, produced using the same method but with two different cultivars. If you were to ask me which one I like best, I would not know how to answer, except that they go very well together and are perfect for comparative tasting.